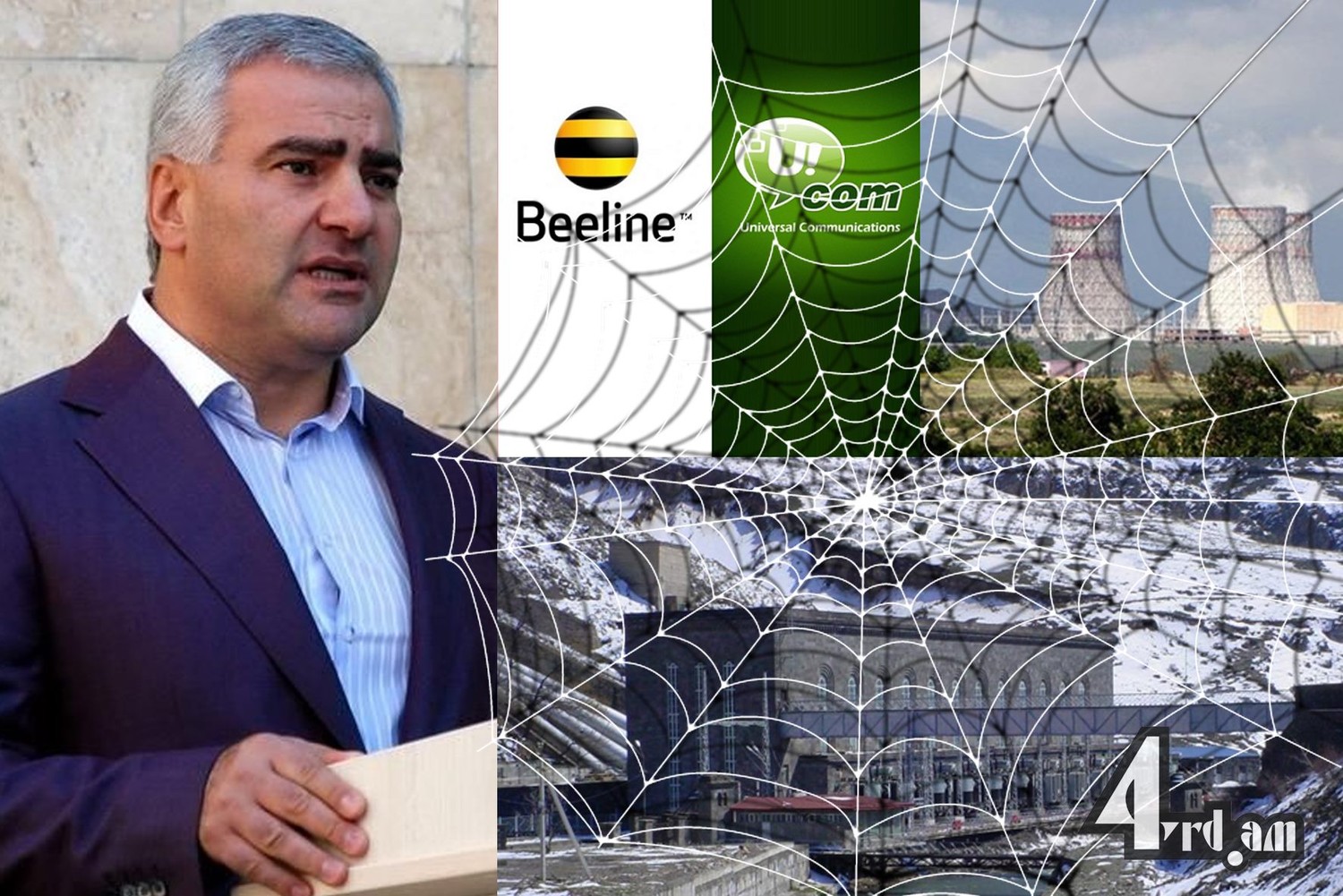 Among Armenia’s sad realities is the fact that we become aware of crucial events for the country not from immediate participants, our government or the Armenian media, but, for example, from Russian newspapers. On November 28, the Russian newspaper "Kommersant" announced a deal on Sevan-Hrazdan Cascade, according to which the Russian hydroelectricity company RusHydro is going to sell 90% of International Energy Corporation’s shares to Hrazdan Energy Company. What makes this news noteworthy is that the latter belongs to the Russian-Armenian Tycoon Samvel Karapetyan’s Tashir Group.

In a December 4 interview with 1in.am, Levon Zurabyan, Vice President of Armenian National Congress, touching upon the Sevan-Hrazdan Cascade deal, claimed that Samvel Karapetyan has also acquired 80% of Ucom telecommunication company’s shares and is negotiating a Beeline deal. He stated that due to the government's inactivity, Armenia's strategic enterprises of energy and communications are being amassed in Karapetyan's hands, which poses serious dangers to the country's economic and political system.

Let's attempt to analyze the situation at hand. Samvel Karapetyan and his brother Karen Karapetyan have always had both economic and political ambitions and interests in Armenia. Due to their lobbying and pledging to invest $ 250 million in Armenia, Karen Karapetyan was even appointed Serzh Sargsyan’s Head of the Presidential Administration in 2008. True, three years later Karen Karapetyan was dismissed after a loud political scandal. If you remember, he called the protesting citizens "morons" in the presence of journalists. The Sargsyan administration has never been particularly polite in its treatment of its own citizens, but this was difficult to digest even for them.

In addition, there was another subtlety. In fact, Serzh Sargsyan had countered the Russian-capital based political-economic aspirations of the Karapetyan brothers with the pole of a criminal but home-grown "Armenian" oligarchy that included Serzh Sargsyan himself, his brother-in-law Michael Minasyan and Gagik Khachatryan. There was a hidden confrontation between these two poles to take control of Armenia's strategic resources.

During the 2015 Electric Yerevan events, Serzh Sargsyan and Mikayel Minasyan lost control of the situation, and, contrary to their plans to stream the protests in a desirable direction, the Electric Networks of Armenia (ENA) came under Samvel Karapetyan's control. Karapetyan then took control of the management of the High Voltage Electric Networks (HVEN). On the eve of the 2017 Parliamentary elections, Prime Minister Karen Karapetyan [should not be confused with Samvel Karapetyan’s brother with an identical name - Ed.], who was playing in favor of Samvel Karapetyan, had a helping hand in the latter’s acquisition of the Hrazdan Thermal Power Plant, which produces about 40 percent of Armenia's electricity. And now, by buying the Sevan-Hrazdan Cascade, [a complex of hydroelectric power plants on the Hrazdan River and its tributaries -Ed.], Samvel Karapetyan has, without exaggeration, seized all the important strategic heights of Armenia's energy sector and can literally dictate the purchase and sale prices of the produced electricity to consumers in an environment that excludes any effective regulation or counteracting by the Public Services Regulatory Commission.

The Velvet Revolution demolished Serzh Sargsyan's already-defeated clan positions in the struggle for strategic resource management in Armenia. Sargsyan's brothers and son-in-law left Armenia in their quest to avoid prosecution, with the son-in-law is being investigated over privatization deal over Dzorahek, a medium-sized hydroelectric plant. Gagik Khachatryan is under arrest. Taking advantage of this situation, Samvel Karapetyan has also begun to occupy positions in the telecommunications sector. Mikayel Minasyan’s and Gagik Khachatryan's shares in Ucom have also gone under his control, which makes Karapetyan its major shareholder with more than 80% of the shares. If Zurabyan's claims are true, today Karapetyan is also negotiating the purchase of Beeline.

Obviously, by handing the telecommunications and energy to one person, our state will create numerous problems for the future of the economy and democracy. In the face of revolutionary public uprising, these problems are not yet discernable, but in the future, when revolutionary enthusiasm yields to a life dictated by harsh economic realities, we’ll come to realise that our entire political and economic system has become hostage to a monstrous monopoly in its mere pursuit of profit, while the proud citizens of the country have once again turned into “morons” in an attempt to survive and feed that monopoly.

Unfortunately, our young government specializing in unsophisticated Facebook PR and selfies, fails to see the underwater rocks and do anything to prevent such a course of events. Therefore, the task for all our proud citizens is to address these concerns to the young government through Facebook or other channels accessible to them, and urge them to adopt an anti-monopoly legislation that would exclude the creation of a new, in the words of the Armenian poet Charents, "invisible giant spider."