Why did Foreign Minister Zohrab Mnatsakanyan and all of Armenia’s proud citizens lose to the BBC? 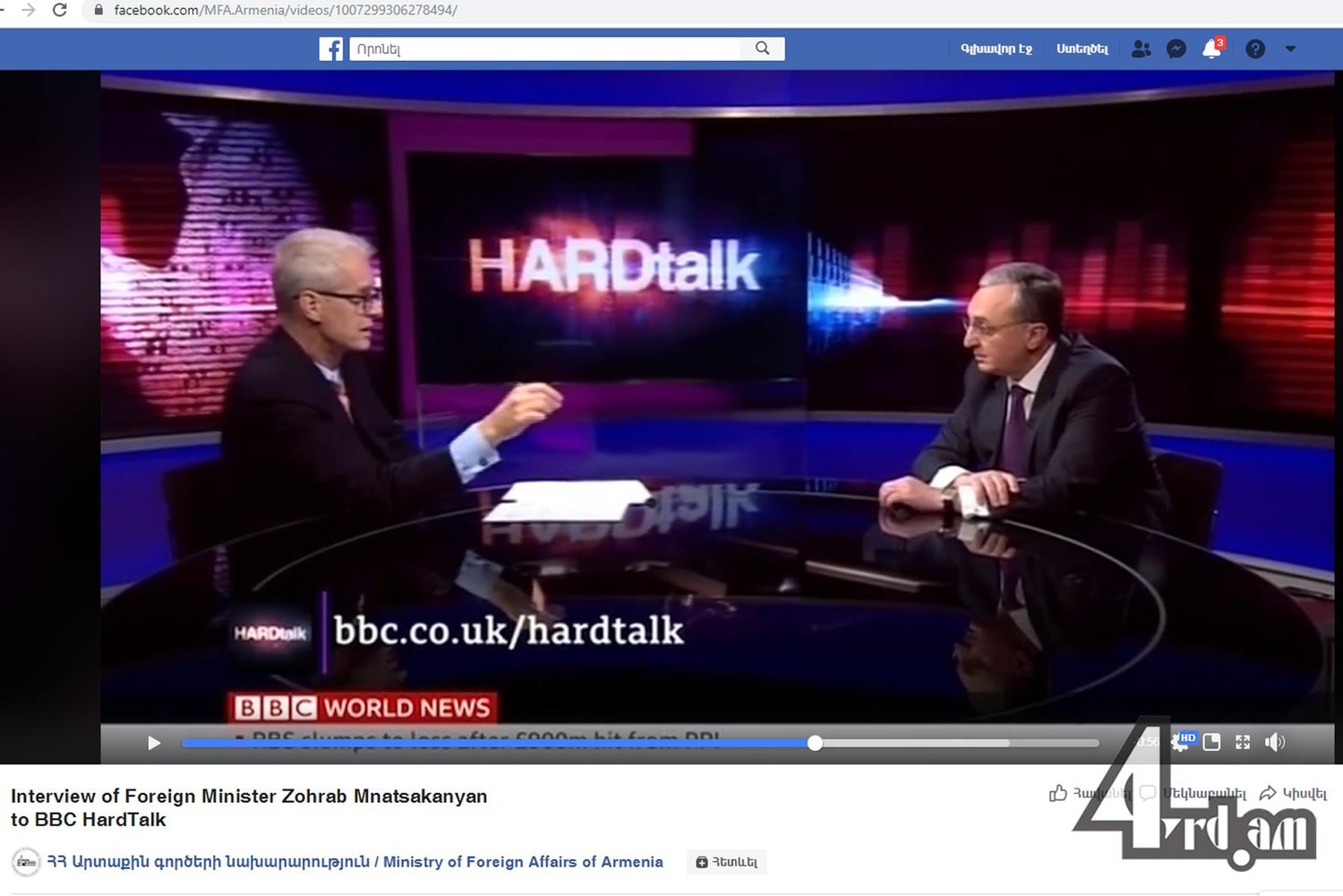 Armenia’s Foreign Minister Zohrab Mnatsakanyan’s interview to the BBC's Hardtalk, a renowned programme in the international media arena hosted by Stephen Sackur, gave a unique opportunity for the Armenian authorities to display their new positions to the world and show the face of the new Armenia. Unfortunately, what the world saw was only a pleasant young man, fluent in English but unable to explain what the new Armenia presented itself to the world with. Moreover, Hardtalk showed the substantive emptiness and bankruptcy of some of the political accentuations and questions raised by the new government in both foreign and domestic politics.

Of course, it was hard to expect a better performance from a man who, representing Armenia in Strasbourg in 2008-2011, took on the role of a lawyer of the old corrupt regime and did a tremendous amount of hard work to rid it of accusations of March 1 crime, election fraud and systemic corruption. For that, he even received a special state award. It was precisely the link with the old authorities that was hinted by the program's host, Steven Sackur, when he mentioned that Zohrab Mnatsakanyan's tenure in the government showed the new Armenia was like the old Armenia. Mnatsakanyan's response was quite laughable, “I’ve made a choice of my own, I’ve made a choice to move from diplomatic career to politics. That’s the major change. I took out the responsibility to share with the government, in which I am, and this is a major change.”

One can understand from this answer that Mnatsakanyan's soul has also undergone a velvet revolution, and this is one of the significant changes in Armenia. Unfortunately, the same revolution did not take place in his foreign ministry, where people deeply integrated into the corrupt Kocharian-Sargsyan system, such as Deputy Minister Avet Adonts, Ambassador to Moscow Vardan Toghanyan and Ambassador to Georgia Ruben Sadoyan continue to dictate the tone, but that's a separate topic for another conversation. It is obvious that such a foreign ministry, along with the minister, is not a bearer of the ideas of revolution and democracy and will never be able to present those values ​​in a comprehensive and convincing way.

The problem is, however, that the BBC's host backed Zohrab Mnatsakanyan into a corner over the "mishaps" of Prime Minister Nikol Pashinyan, the leader of said revolution. At the UN General Assembly and other tribunes, Pashinyan made firm statements about overcoming systemic corruption and in particular stated that, “Immediately after coming to power we initiated a package of drastic measures to establish democratic institutions that have never existed in our country before. Among the measures are, for example, the efforts aimed at… anti-corruption bodies.”

Referring to these statements, the presenter responds, “There is some hubris in your government, because the PM Mr. Pashinyan told European MPs not so long ago and here is the direct quote: “We have managed to root out systemic corruption”. That is apparently not true.”  Then he presses further, “And you claim, that work has been done very quickly. But we have your Justice minister, just the other day, Mr Badasyan, announcing that the new agency to discover and investigate corruption crimes, the so-called Anti-corruption committee, won't be operational until 2021…” Of course, Mnatsakanyan did not give any exhaustive answer to this question, because, as it turned out, "misleading" the international community is not an easy task.

Mnatsakanyan's major defeat, however, comes from another misstep by Nikol Pashinyan. When the latter declared in Stepanakert “Karabakh is Armenia and period,” it could be assumed that this statement would seriously damage our diplomatic positions. This was most evident during the Hardtalk program. The host announced, “I have seen no evidence that your government has brought new ideas, new imagination to this conflict," then went on, “I have to be honest with you, when a Prime-Minister declares “Karabakh is Armenia and period,” When he knows that it flies in the face of international law, the position of the UN and all of the independent international agencies, I am struggling to see how that is a move, a gesture towards peace.”

Of course, finding the right answer in this case proves difficult, as Pashinyan's statement really contradicts Armenia's commitments in the negotiations mediated by the OSCE Minsk Group. At the same time, taking advantage of the issue, we could present our stance on both the status of Karabakh and the trilateral format of the conflict. It is striking that for the most part in this interview on the Karabakh conflict we did not hear the word "self-determination" from the Armenian foreign minister at all. Bringing up the principle of nations' self-determination would allow us to present the essence of our position regarding Karabakh, as well as to explain why we neither consider Karabakh to be part of Azerbaijan, nor circumvent international law with that.

Mnatsakanyan's main failure was related to the moment when the host said, “No question that Armenian people live on that territory but that territory is not Armenian.” Mnatsakanyan was only to counter that Karabakh had never been the territory of an internationally recognized state of Azerbaijan and that the status of Karabakh should be determined on the basis of the principle of self-determination of the nations, but as we witnessed, the foreign minister had simply forgotten about that principle. Instead, he repeatedly voiced the mantra about Armenia being the guarantor of Karabakh's security, the only lesson he seemed to have learned well.

The criticism can go on, but it is clear that today Armenia's foreign policy is headed by individuals who do not have a clear idea of what vision of the Karabakh conflict settlement can the international community offer, and do not have clear positions on this issue. Until this issue is resolved, we will be doomed to suffer diplomatic defeat and lose in international debates.